Under the guidance of teacher Keith Gall, students from Northville Montessori competed at the Third Annual We the People National Invitational April 17 – 21, 2015 on the campus of George Mason University in Fairfax, Virginia. 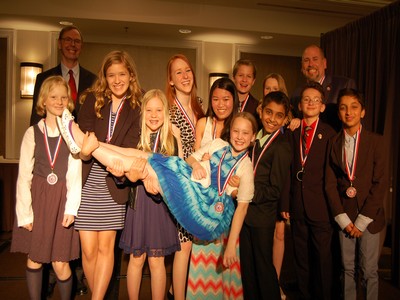 The National Invitational takes the form of simulated congressional hearing. During the competition, students were put to the test by judges, including constitutional scholars, lawyers, and public officials, who challenged them to apply constitutional principles and historical facts to contemporary situations. The class was divided into six groups based on the six units of the We the People: The Citizen & the Constitution middle school textbook.

Northville Montessori was pleased to leave with two Unit Awards—Units One and Four.

The team earned the right to compete at the national level after participating at the Michigan We the People State Finals in January. While in Washington, D.C., students also had the opportunity to tour our nation’s capital and meet with members of Congress and other important dignitaries.