May 15 2021. Michigan’s Ann Arbor Huron High School and Novi High School represented the best of law related education this weekend at the National High School Mock Trial Championship.  Forty-six top finishing state and international teams gathered virtually to showcase their legal knowledge through simulated courtroom hearings.  Michigan has a long history of excellence in both the state and at the national championship.

Ann Arbor Huron High School advanced as Michigan’s State Champion to represent the state at the National Finals. The team performed extremely well with victories against many nationally known powerhouse schools. Led by instructor Mr. Andrew Face, the students worked through the elements of a criminal trial portraying witnesses and attorneys while being scored by attorneys and judges.  “I am just so incredibly proud. I know they represented their school and their state well” said Mr. Face.

Also in the competition is the emerging Courtroom Artistry Program. Selena Wang, a student at Novi High School, advanced as the Michigan Courtroom Artist State Champion. Ms. Wang finished 3rd in the nation with her rendition of the Zoom courtroom. Ms. Wang’s Mock Trial instructors and coaches are Ms. Darcie Moss and Ms. Megan Chapin-Dubé.  Ms. Moss says of Ms. Wang, “I think she uses color and the whole page so well.  Such depth, and the boxes around the heads – so timely, so touching.” Nancy Hart, Chair of the Illustration Department and an Associate Professor at the Kendall College of Art & Design at Ferris State University, one of this year’s National Artist Evaluators, said of Ms. Wang’s rendering “This illustration does an excellent job of telling a courtroom story. It does have a sense of emotion on the DA and witness. The connection between the two provides a moment of inquisition. This is a good example of editorial illustration.  It demonstrates professionalism and skill.”

The legal team and the courtroom artist qualified to compete at the national competition based on their performance at the Michigan Center for Civic Education (MCCE)’s regional Mock Trial events and State Finals held February – March.  Over thirty five schools and over 150 volunteers across the legal, governmental, political, and educational professions evaluated the students in their trials.  Mock Trial is a school program designed to provide meaningful, student centered, and enhanced civic and legal  knowledge whereby students delve deep into the law transforming themselves into attorneys and witnesses.   Research also demonstrates the unique effectiveness of this program to instill civic knowledge, understanding, appreciation, and eventual sustained civic engagement through a sense of civic agency.

Additionally, many Michigan volunteers served as judges throughout the national event. Scoring the prestigious final round were the Honorable Kameshia D. Gant of Michigan’s 6th Circuit and Attorney Jay Yelton of Warner Norcross + Judd LLP represented Michigan as judges in the Blue Ribbon Championship Round. Also judging in the preliminary rounds were Hon. Curtis Bell of the Kalamazoo County Probate Court, Ms. Melanie Gagnon (Fradette) of The Auto Club Group, and Ms. Jennifer Rosa of the Michigan Department of the Attorney General.

Mock Trial is a program of the Michigan Center for Civic Education. Since 1982, MCCE has advanced civic knowledge through a series of student programs, professional learning, and more. In addition to Mock Trial, MCCE also hosts the We the People series, Project Citizen, and more to bridge students to the legal community, civic knowledge, and civic engagement.

Together with the partnership of the State Bar of Michigan, next year MCCE will host the premier National High School Mock Trial Championship, May 5-7, 2022 in Kalamazoo, Michigan. This will be the first time the State of Michigan has hosted the event. Kalamazoo Central High School has been the most decorated Michigan Mock Trial team in history with numerous appearances in the final round and a national championship to its name. Hundreds of volunteers are needed for this event and sponsorships are available. 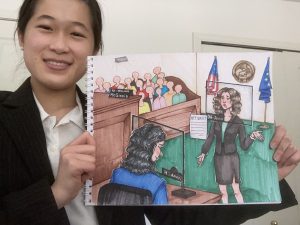 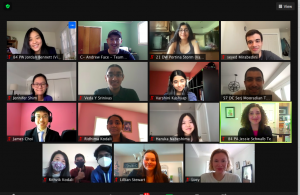 Colleagues in Civic Education, We hope this finds you well!  We... read more

Project Citizen returns to Michigan! All schools are welcome to enter... read more

MCCE and the State of Michigan would like to extend its... read more

Congratulations to all the schools who participated in the district and/or... read more