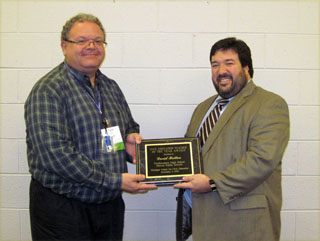 The selection of teacher of the year is based on the following criteria:

Mr. Britten has been in the Detroit Public Schools since 2005, first at Denby High School and most recently at Northwestern where he teaches Student Government, Basic Law, and World History. Mr. Britten helps run the highly successful Teen Court Program and coaches Northwestern’s mock trial team in the Michigan High School Mock Trial Tournament. He is the Student Government advisor, and is a leader in Michigan Youth in Government.

Mr. Britten came to education from the business world, first beginning his career in accounting. After a very successful and lucrative start with long term assignments in Switzerland and London, he knew that his real calling lay in teaching students to successfully navigate their world as young citizens. Hales described a conversation with Britton where he indicated that his greatest success is in seeing a “light bulb” go off in students and applying their learning to the world around them. An observer would find his students participating in projects like the adopt-a-child program, visiting shelters, coming together with his leadership on Saturdays to board abandoned building in the school’s neighborhood, participating in the Motor City make-over, among other things.

Britten left the world of business to pursue teaching to make a difference in the life of young adults. He wasn’t willing to just sit by and take the easier route of criticizing the youth of Detroit, as others often do. Britten rolled up his sleeves and said, “Let’s get to work.” He is proud of Detroit and the Detroit Public Schools and the hard working educators endeavoring to create meaningful change for students. Sheryl Jones, Director of the Office of Social Studies for Detroit Public Schools also thanked Britten for his tireless advocacy of his students.