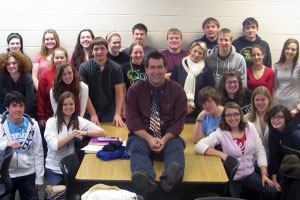 In 2007-2008, Oglesby was named the Howell Schools’ Teacher of the Year and was a finalist for the Michigan Teacher of the Year in 2008-2009. The group’s selection committee noted that Oglesby, a social studies teacher with the district for 12 years, “teaches an advanced placement class in United States government, and because of his students’ success, he has been appointed as one of two high school teachers on the College Board’s Development Committee for advanced placement United States government. He has led his students to great success in the rigorous We the People….Citizen and the Constitution program, finishing in the top three in the state competition for seven years in a row.”

In addition, his students have been co-hosts and reporters for the National Student-Parent Mock Election Program hosted by Michigan Government Television (MGTV). In 2008, his AP students were featured in the Livingston County Daily Press & Argus, where they were asked to share their views on the presidential election. He has been interviewed by National Public Radio three times, most recently on December 31, 2010, when he was asked to share the civic lessons from the news. Oglesby was also awarded the American Civic Educator award this year. “It’s an honor to win the award,” Oglesby said. “I have been fortunate to teach some great students who are excited about learning.” Founded in 1982, the Michigan Center for Civic Education is Michigan’s premiere non-profit, non-partisan organization serving the mission of promoting the development of engaged, responsible citizens through civic and law-related education. Serving on the Center’s Advisory Board are Attorney General Bill Schuette, Michigan Supreme Court Justice Marilyn Kelly, Superintendent of Public Instruction Michael Flanagan, Michigan State Police Director Kriste Etue, State Bar of Michigan Executive Director Janet K. Welch, and Superintendent of Oakland Schools Dr. Vickie Markavitch.